ALWAYS THE LOWEST PRICE GUARANTEED
Sleep and Beyond | Blog > Guides > Oxford or Housewife – Which Pillow Case is for Me?
Menu
Guides

Oxford or Housewife – Which Pillow Case is for Me?

Do you know the difference between Oxford and Housewife pillow cases? Had you even heard those names before now? It’s OK if you haven’t – they aren’t terms that you often hear in regular conversations after all. To most people a pillow case is a pillow case, but there are subtle differences between these two types that are worth knowing about. 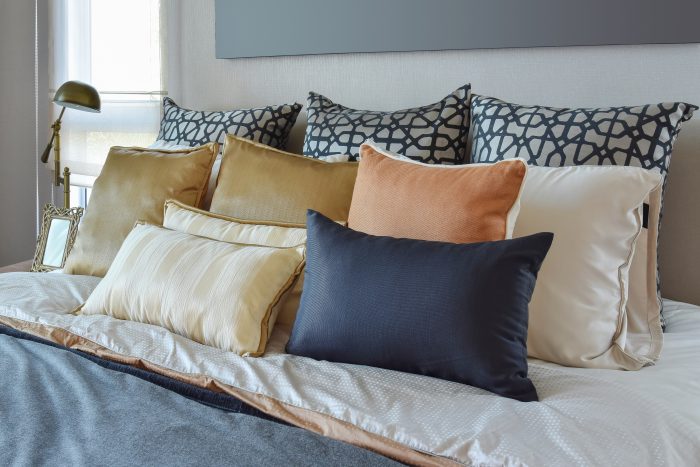 Here’s a rundown of the main differences between Oxford and Housewife pillow cases and where they got their names:

Ignoring the name for the time being, Housewife pillow cases are what we all recognise and regard as ‘regular’ pillow cases, and traditionally feature a plain, sewn edge which fits snugly around standard rectangular pillows. There’s no fuss and no additional features; this design simply does exactly what it says on the tin.

Why are they called ‘Housewife’?

There is a lot of uncertainty around the origins of this unusual name, so we cannot be entirely sure where it originates. The name is especially curious today, given that the term ‘housewife’ – especially when used in connection with household products –  has unavoidably ‘sexist’ connotations, making it hard to believe that these products would still carry this name today if these were the original intentions when pillow cases were invented.

However, we have reason to believe the name has a much more pleasing source. The story goes like this:

Back in the 19th century, pillow cases were stitched with a closed end and a very simple open end – a glaring design flaw which resulted in the pillows simply falling out or gradually working their way out of their cases over time. This is where the Housewives Cooperative in Bolton apparently stepped in and adapted this design with an inside flap at the open end to secure the pillow in place. The design was, therefore, said to have been named the ‘Housewife’ in recognition of the Cooperative’s breakthrough.

The Oxford pillow case is the Housewife’s fancier cousin, and is made with an additional fabric border which surrounds all four edges of the standard case. This additional flat border is usually around 5 cm in width, but can be up to 10 cm in some designs and is purely decorative in nature. Oxford pillow cases are still made to fit standard pillow sizes perfectly, with the border simply giving the appearance of larger overall size.

Why are they called ‘Oxford’?

Again there is some confusion around the origin of this name, with many people simply assuming that this particular design must have been invented in Oxford. However, there is also a very convincing theory that the Oxford pillow case was named after the type of fabric it was originally made from – a thick cloth known as Oxford cloth. If you’ve heard of the Oxford shirt, you will know that Oxford cloth was chosen for its thickness and additional durability, which is why this type of fabric was also chosen for pillow cases of this type.

Which one is best for Me?

Both types of pillowcases are equally functional, so your choice of Oxford or Housewife pillow cases will come down to preference alone.

It all depends on whether you’re looking for something basic and purely functional or if you want your bedding to look more decorative and fancy. Housewife pillow cases, with their basic rectangular shape, are relatively plain and simple, but can be made to look more appealing with the addition of attractive prints. These are great if you’re a fan of minimalism or if you’re simply looking to keep costs and general ‘fuss’ as low as possible.

Oxford pillow cases, on the other hand, add a much more decorative and elegant effect to your bedding sets with that additional border creating the illusion of extra large pillows. These are perfect if you love adding extra layers of luxury and adornments to your interiors, and are excellent for making guest rooms look extra special and inviting.

Whichever pillow case design you go for, you’ll find both styles in a fantastic range of comfortable fabrics, bright and neutral colours and attractive prints here at Sleep & Beyond. Take a look at our full range of quality pillow cases and match them up with our wider range of bed linen to complete your ideal bedding set.